From Old School RuneScape Wiki
Jump to navigation Jump to search
This article is about Saradomin's elite unit. For other uses, see Justiciar (disambiguation). 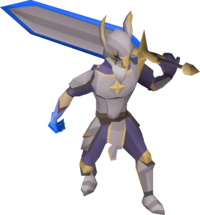 Justiciar Zachariah, the last known member of the Justiciars.

The Justiciars were elite warriors in Saradomin's army during the God Wars. Selected from a variety of races, they were all chosen by Saradomin himself who granted them great power. Some justiciars worked alone as assassins behind enemy lines, while some led entire armies.[1]

At Hallowvale's height, there were four known Justiciar groups operating - the Lion, Owl, Unicorn, and Wolf; these Justiciars led knights under their groups for various duties, whether it be for battle or for maintenance purposes. The Lions were a group of skilled mages, the Wolves dispatched of monsters, while the Unicorns maintained the Hallowed Sepulchre.

During Lowerniel Drakan's invasion of Hallowland, many of these Justiciars fell in battle. The armour of several Justiciars who fell in battle against Lord Drakan were claimed as trophies and are now stored by Lady Verzik Vitur in a vault within Ver Sinhaza, the former palace of Queen Efaritay.

Justiciar of the Lion[edit | edit source]

The Justiciar of the Lion, Aliya, was the most powerful mage of the Justiciars, she was said to be able to wipe out an entire army of demons with a single spell.

She, along with Zachariah, the Justiciar of the Owl, were tasked by Saradomin himself to protect a powerful artefact known to them as The Eye. She would go on to build the Temple of the Eye, a sanctuary for the artefact, found on the ocean floor south of Hallowvale.

Justiciar of the Owl[edit | edit source]

The Justiciar of the Owl, Zachariah, was one of the Saradomin's wisest servants. He had a personal love for lilies, and it is said that anything he plants blossoms with unimaginable vigour.

He, along with Aliya, the Justiciar of the Lion, were tasked by Saradomin himself to protect the Eye. Knowing Zamorak has given Porazdir, his collector, the task of finding the Eye, he is duty-bound to hunt him down, alongside any others who wish to take it. Today, he continues to hunt and battle Porazdir. As he is human and being one of the original Justiciars, he is several thousand years old, with magic prolonging his life, as one of knights mentioned that he did not recall a magical hand.[2]

Justiciar of the Unicorn[edit | edit source]

The Justiciar of the Unicorn, whose name is not known, was the holiest priest of Saradomin. He would spread Saradomin's teachings wherever he went, and convert the masses to his religion.

Justiciar of the Wolf[edit | edit source]

The Justiciar of the Wolf, Phosani, was the fiercest and most loyal of Saradomin's followers. Despite this, she eventually defected and joined the Zamorakians, as she felt abandoned by Saradomin during the Fall of Hallowvale. The turncloaks were welcomed by the vampyres[3]. Phosani later founded The Sisterhood and eventually succumbed to the side effects of the Elixir of Everlasting, and remains in a deep eternal sleep in the Sisterhood Sanctuary.