Justiciar Zachariah is a Saradominist Justiciar who roams the Wilderness hunting the demon Porazdir. During Mage Arena II miniquest, he has to be defeated in order to obtain his hand for Kolodion's spell. In order to summon him, players have to use an enchanted symbol to locate him, similar to using an enchanted key or strange device. 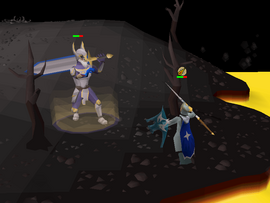 When fighting Zachariah, he occasionally swings his sword, releasing a shock wave aimed at the player's location. If they do not move, the attack will drag the player forward into melee range and bind them in place, where his sword is able to attack every 3 ticks (1.8 seconds). His melee attacks hit much harder than his regular magic attacks, so moving out of the way of the shock wave attack is recommended to prevent this from happening.

Instead of dodging the shock wave attack, players can stand in a safespot so as to avoid all damage.

Zachariah can only be harmed by the Saradomin Strike spell. As such, a Saradomin staff or staff of light is required to defeat him. 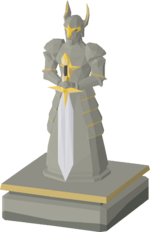 As a Saradominist Justiciar, known as the Justiciar of the Owl, he was known as one of the wisest servants of Saradomin.[1] He had a personal love for lilies, and grew them alongside various foliage within the Hallowed Sepulchre.[2]

During the God Wars, after having secured the Stone of Jas from Zamorak, Saradomin hid the Stone on the ocean floor south of Hallowvale and tasked him and Aliya, the Justiciar of the Lion, to protect it.[3] Knowing Zamorak had given Porazdir, his collector, the task of finding the Stone, he is duty-bound to hunt him down, alongside any others who wish to take it.[4]

Today, Zachariah continues to hunt and do battle with Porazdir. As he is human, he is several thousand years old, with magic likely prolonging his life, as one of his knights mentioned that he did not recall a magical hand.[5]