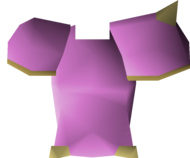 The Justiciar chestguard is a platebody requiring 75 Defence to equip, and is part of the Justiciar armour set. It is only available from the supplies table in an unrestricted world as a test armour for players. As it was a test armour, the graphics were used as a placeholder, using a pink Torag's platebody.

When the full set of Justiciar armour is equipped, the player gains a set effect: all combat damage taken is reduced (except in PvP). The exact formula for the amount of damage reduced is

, where bonus is the player's defence bonus for that particular style. For example, if an enemy was using a crush style attack, and the player has a crush defence bonus of +450, then 15% of the damage (450/3,000) is reduced.