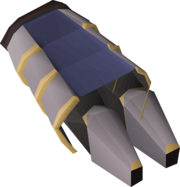 The Justiciar legguards is obtained as a rare drop from the Theatre of Blood. It is part of the justiciar armour set, and requires level 75 Defence to equip.

When the full set of Justiciar armour is equipped, the player gains a set effect: all combat damage taken is reduced (except in PvP). The exact formula for the amount of damage reduced is

, where bonus is the player's defence bonus for that particular style. For example, if an enemy was using a crush style attack, and the player has a crush defence bonus of +450, then 15% of the damage (450/3,000) is reduced.