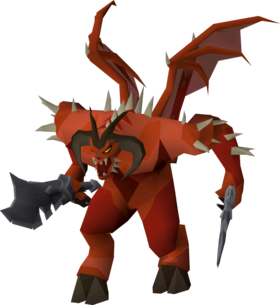 K'ril Tsutsaroth (pronounced "KRILL TUTT-zee-roth"[1]) is the boss of the Zamorak Fortress in the God Wars Dungeon. To gain access to his chamber, players must have slain 40 Zamorakians throughout the dungeon. He uses melee and magic attacks, and his special attack can occasionally hit through the Protect from Melee prayer should players attempt to use it.

He is typically killed on a Slayer task - K'ril Tsutsaroth is classified as a greater demon, and thus killing him counts towards any greater demon Slayer task and allows a player to take advantage of the damage boosting effects of a Black mask or Slayer helmet. As a demon, he is also susceptible to Arclight's passive effect. 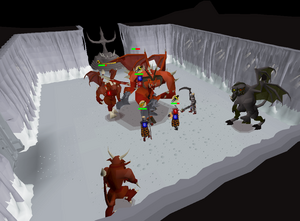 Like other God Wars Dungeon bosses, K'ril roams around a rectangular room with his bodyguards until a player enters, attacking them on sight. He attacks with melee and magic, and if his target is praying Protect from Melee, he can use a devastating melee special attack that hits through prayer. The melee attack has a maximum hit of 46, the magic attack hits from 10-30[2] and the special attack hits from 35-49[3], as well as draining half of the player's current prayer points. The relative occurrences of the attacks are 2/3 for melee and 1/3 for magic. Barring a complex mechanic, K'ril will use his special on 1 in every 9 hits instead of a melee attack, which gives it an incidence of 2/27 in total.[4] If all players leave, his health and stats will be reset.

Drop rates estimated based on 15,111 kills from the Drop Rate Project, unless otherwise cited.