From Old School RuneScape Wiki
Jump to navigation Jump to search
The RuneScape Wiki also has an article on: rsw:Kalphite Hive
Not to be confused with Kalphite Cave.

The Kalphite Lair is located north-east of the Bedabin Camp, in the Kharidian Desert. Players will need a rope to enter the lair and another to enter the area containing the Kalphite Queen. As the name suggests, only Kalphites live in this area.

Players will need to bring a rope every time they visit the lair, and another rope should they wish to reach the Queen's lair; players who have completed the Hard Desert Diary need not do so after attaching the ropes one last time post-diary completion. There is also a crevice shortcut requiring 86 Agility and the Elite Desert Diary to use; it is a two-way shortcut and is helpful for players wishing to kill the Kalphite Queen as it will drop them off in the room leading to her chamber. Entering the Kalphite Lair, as well as collecting 5 potato cacti while inside, are required for the Easy Desert Diary.

Note: You do not need waterskins while inside the lair's entrance. 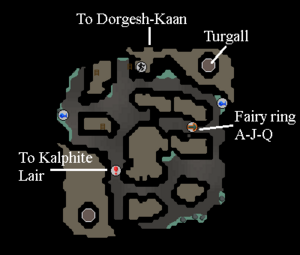 The second level has one exit: a rope climb at the east to the first level, which is how players must enter initially. 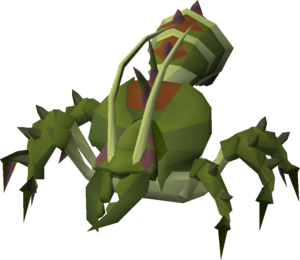 The Kalphite Queen lurking in her lair.