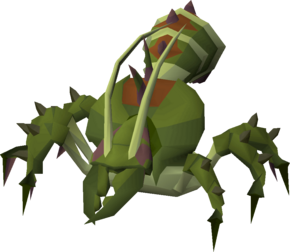 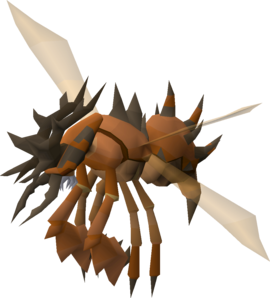 The Kalphite Queen (Kalphiscarabeinae pasha), also called the KQ, is the strongest of the Kalphites. The Kalphite Queen, along with dust devils and smoke devils, is notable for dropping the Dragon chainbody. The Kalphite Queen can inflict large amounts of damage with her Ranged and Magic attacks as they always result in a successful hit. It is recommended for players to bring an emergency teleport such as an Ectophial, royal seed pod or teleport tablet, or only bring items into the lair for which they are willing to pay the gravestone fees.

The Kalphite Queen resides in her lair south-west of the Shantay Pass. If you are lucky and fast, you can run from the Shantay Pass to the Kalphite Lair fast enough so that the desert heat does not affect you. Alternatively, the fairy ring BIQ can take you to right outside the Lair entrance. You will require a rope to enter the dungeon, which will be used in the process. A second rope is required to reach the lower level where Kalphite Queen resides. Completion of the hard Desert Diary removes the need to bring ropes each time.

Players who have 66 Agility and have completed the Hard Lumbridge & Draynor Diary can use the stepping stones shortcut in the Lumbridge Swamp to quickly access the lair. 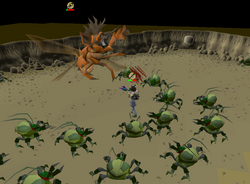 A player fights the airborne form of the Kalphite Queen.

The Kalphite Queen has a combat level of 333. Each form has 255 Hitpoints, and her Ranged and Magic attacks have 100% accuracy.[1] She may also use a decently accurate melee attack. The Queen has two forms: in the first, she is an immense scarab beetle, and in her second, a giant wasp. She switches forms only after the first has been fully defeated. 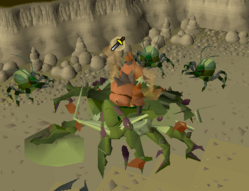 The Kalphite Queen transforming to her second form.

As a beetle, she is extremely resistant to Magic and Ranged attacks, as indicated by her overhead prayers. As a wasp, she is resistant to Melee attacks. Therefore, players should be prepared to use both Melee as well as Ranged or Magic.

Each of her attacks has a max hit of 31. Her Ranged attacks consists of her shooting barbed spines from her abdomen. Her Ranged attacks will drain 1 prayer point (which may be reduced by spectral spirit shield). If there are players close to the person being targeted with this attack they will also be hit, to avoid this players can stand on opposite sides of the Kalphite Queen. Her Magic attack bounces from player to player. Her Melee attack can also hit high, but unlike the Magic and Ranged attacks, it does not have a 100% accuracy.

If stat-draining special attacks are used on her first form, the stat reductions will carry over to the second form.[2]

Drop rates estimated based on 27,711 kills from the Drop Rate Project, unless otherwise cited.

There is a 1/128 chance of rolling the rare drop table.