Kalphite soldiers can be found in the Kalphite Lair south-west of Shantay Pass and in the Kalphite Cave east of the Shantay Pass, although the latter requires having a Slayer task to kill. They guard the entrance to the lair of the Kalphite Queen. These are highly dangerous because of their ability to poison starting at 4 damage without dealing melee damage, and they inhabit a multi-combat area.

A player can choose to hunt these for Slayer when given the task to kill Kalphites. When given this task, a player can choose to kill any of the Kalphite family (Workers, Soldiers, Guardians or the Queen). Killing Kalphite Soldiers will grant 90 Slayer XP per kill. Using a Dwarf multicannon in their chamber yields one of the best XP rates next to Lighthouse dagannoths, and therefore many players use cannons to train here.

Players collecting Brimstone keys are encouraged to kill either the higher level Kalphite Guardians or skip the slayer task, as the drop rate for the Brimstone key for these monsters is relatively low (1/145). [1] 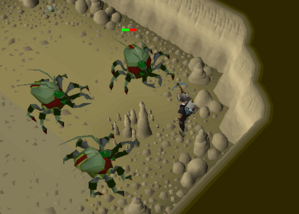 Drop rates estimated based on 742,500 kills from the Drop Rate Project, unless otherwise cited.

The average Kalphite Soldier kill is worth 199.02.

The average Kalphite Soldier kill while on a Konar task is worth 848.24.