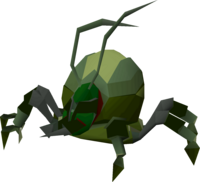 Kalphite workers are worker drones that serve the Kalphite Queen. They are found throughout the Kalphite Lair and Kalphite Cave west and east of the Shantay Pass, respectively. They cannot poison, unlike the majority of Kalphites.

Kalphite workers, like all other Kalphites, are affected by Keris. They can also be assigned to players as a Slayer task. A Dwarf multicannon can be used to fight them as they are in multi-combat zone.

Drop rates estimated based on 880,000 kills from the Drop Rate Project, unless otherwise cited.

The average Kalphite Worker kill is worth 128.48.