(Not to be confused with Karil, one of the Barrows Brothers)

Kamil is one of the four guardians of the Diamonds of Azzanadra, fought in the Desert Treasure quest. He uses Ice spells that will freeze the player. He resides in a freezing environment which will constantly lower the player's stats, providing an additional threat when fighting him.

Kamil makes a reappearance in the Recipe for Disaster final battle as Karamel.

He can be fought in the Nightmare Zone after the quest is complete. He is immune to movement inhibitors from ice spells, bind, snare, and entangle.

Kamil is reached east of the Ice Path, north of Trollheim.

First go north-west of Trollheim (the easiest way to get there is by Trollheim Teleport, which requires 61 Magic and completion of Eadgar's Ruse) and walk to the Ice Gate. Squeeze between the gate, kill five ice trolls to get the cave to open. Enter the cave and head up the Ice Path, past the ice wolves and there will be a clearing. Kamil will soon appear when the player walks a few steps past a boulder. 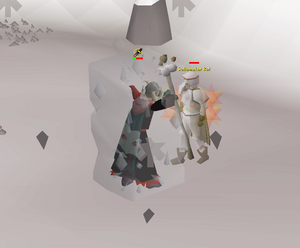 Fighting the warrior of ice.

Since Kamil hits higher with melee, it is advised to use Protect from Melee and wear armour that defends well against Magic. Note that Kamil's Magic attack is very accurate and the icy environment will constantly lower the player's stats which also means their Magic resistance is lowered each time, so it may be a good idea to assume most of Kamil's Magic attacks will be a successful hit and the player maximises their offensive bonuses. Kamil is immune to spells other than Fire spells; this immunity includes Iban Blast, Trident of the seas/swamp and Flames of Zamorak.

Whenever Kamil casts his magic attack, he will encase the player in ice for a short time. During this time, all actions, including eating and teleporting, are blocked. Also note that, if Kamil is not in melee range, he will use his magic attack much more often, effectively keeping the player stunned for the majority of the fight. Therefore, it is in the player's best interest to lure Kamil to melee range by hiding behind the first boulder encountered in his arena. When you have been stunned by his magic attack, be sure to time your attacks within one game tick before the ice breaks. This will ensure that your character successfully attacks the instant the ice breaks.

Super restores or Prayer potions and restore potions are advised to counter the freezing environment and in order to restore Prayer.

If using Magic, Ahrim's robes, Lunar robes, Splitbark armour, or Mystic robes are a good choice. Players should not use a Fire spell if their Magic level is around the level to cast it, as they will constantly need to drink restore potions; instead they should pick a lower-level Fire spell, an effective countermeasure to the freezing environment which constantly lowers stats. Players who have completed Family Crest may wish to take advantage of the chaos gauntlets which will raise the max hit of Fire Bolt to 15. Using Ranged is also effective against Kamil.

Kamil is also considered an ice warrior in regards to Slayer tasks, so if the player has ice warriors as their current task a Black mask (i) or equivalent would provide a damage bonus against him.