Karamja (pronunciation: /kə.ˈrɑm.dʒə/ "kuh-ROM-juh", /ˈkɛr.əm.dʒɑ/ "KER-uhm-jah", among others) is arguably the largest island in Gielinor. It is located to the south of the major kingdoms of Asgarnia and Kandarin. The island contains mostly jungle and tropical geography. You can reach Karamja using the fairy ring code CKR, or by charter ship. Different tribes of Karamja speak different Karamjan languages.

Karamja seems to have little documented history, with virtually nothing known about Karamja during and especially prior to the God Wars. Bandos used Karamjan jungle to breed jogres. Broodoo victim's examine info may suggest that prior to its colonisation, Karamja was overrun with savages who partook in deadly murderous rituals to their gods. This process is much like the Aztec blood sacrifices. The examine info is as such: A victim of an ancient murderous tribal ritual. His skin has turned a sickly colour.

Due to its distance from civilisation, southern Karamja was used by many to imprison powerful beings such as Nezikchened.

The first known permanent human settlements, possibly in northern Karamja, were formed during the period between years 600-900 of the Fourth Age.

In recent years, Karamja has become a major fishing area and a fairly convenient docking point for ship travel between eastern and western RuneScape, mainly from areas like Port Sarim to areas like East Ardougne. A selection of ground issues around Karamja was resolved on 9 November 2009. 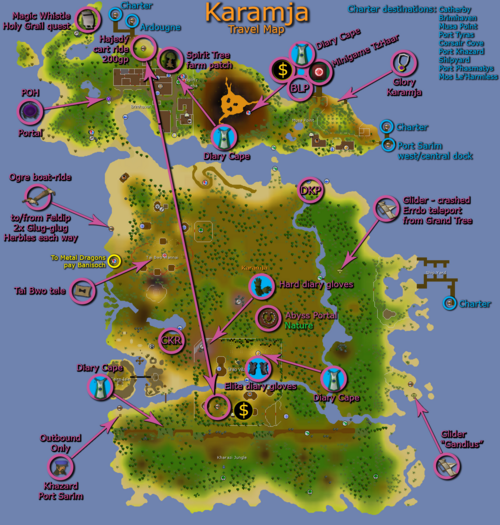 TRAVEL MAP: See where you need to be and the best way to get there with this visual travel map of the land of Karamja.

A popular way to travel for free players is by ship from Port Sarim, which costs 30gp for the trip. Another ship route is available from the Ardougne Docks to Brimhaven. Players who wish to travel by boat will have their inventories searched by customs officers, as the law prohibits individuals from carrying rum off the island. Those who wish to circumvent this and smuggle rum to the mainland may find it helpful to check the guide for the Pirate's Treasure quest, where the player must smuggle Karamja rum.

(Points of origin listed on the left-hand side, destinations listed at the top.)

Regular service costs 30 coins to utilise; charter service is significantly more expensive, depending on the route.

Musa Point is the north-eastern part of Karamja, and is the only part of Karamja that free players can access. While not really being a true village or city of its own, Musa Point is a trading establishment that supplies Asgarnia with resources such as bananas and assorted fish (primarily lobster).

At Musa Point, there is the home of Luthas, who runs the banana company. Players can collect 10 bananas for 30 coins. There is also a pub and a general store nearby. The pub is involved in the Alfred Grimhand's Barcrawl miniquest, which sells Karamja rum. The general store provides only normal stock, but there is a rope, jug, and banana spawn on the tables.

There are several creatures roaming the Musa Point, such as monkeys (which can be killed for slayer tasks or monkey corpses), snakes, and others.

Musa Point is also home to the one of the three lobster, swordfish, and tuna fishing spots available to free players (the others are in the Wilderness and Corsair Cove Resource Area). Because of this, the docks are quite popular. However, they are fairly far from the nearest bank in Draynor, so free players generally bring several sets of logs and a tinderbox to cook their fish right on the dock, especially when fishing swordfish. By cooking and dropping the tuna and burnt fish, they can stay for much longer. Some players train their Cooking while they fish by picking up dropped raw tuna, cooking it, and dropping it again.

There is also the Karamja volcano, where players who have finished the Dragon Slayer I quest can access the island of Crandor through the hidden door inside the volcano, it is also a popular spot where free players can farm imps for the Imp Catcher Quest. Members can also use the cave entrance on top of the volcano, to reach the Mor Ul Rek. The way of access to Musa Point is either via a boat from Port Sarim or via an amulet of glory teleport. There is also an Agility crossbow shortcut, a little south from the volcano. (Note that one's mith grapple will occasionally break.)

Inside the volcano, Karamja has a dungeon allowing access to the Mor Ul Rek and Crandor. It is a useful location for both members and free players to fight skeletons, deadly red spiders, and lesser demons. The lesser demons are notable for the rune med helm drop - one of the best free-to-play monster drops. The dungeon consists of a long pathway along the edge of the volcano's lava. Players that have completed the Dragon Slayer I quest can go through a secret wall to access the rest of the dungeon. This section is also a long pathway with many skeletons and lesser demons, and also is where players of the Dragon Slayer I quest find Elvarg.

Mor Ul Rek is a city located underneath the volcano on Karamja. It is accessible by a small cave near the entrance of the Karamja - Crandor Dungeon. It is home to the TzHaar species and their two activities: the Fight Pits and the Fight Cave. The city uses a different currency from the rest of RuneScape: Tokkul. There are several shops in Mor Ul Rek that only accept Tokkul for payment.

Brimhaven is a members-only pirate town west of Musa Point. Notable features include the Brimhaven Agility Arena and a House portal. There is also a spirit tree and fruit tree farming patch. Part of Heroes' Quest takes place in Brimhaven. In southern Brimhaven, Fly traps are scattered and mixed in the jungle with pineapple plants.

Westernmost part of northern Karamja is a jungle inhabited with many tribesmen and has numerous gold rocks. It also includes access to the large Brimhaven Dungeon. The southern part of the jungle is connected by a small isthmus to the much larger south part of Karamja.

The majority of southern Karamja is covered by a large, dense jungle, and is divided into west and east sections by a large river. The river is able to be crossed by Agility shortcuts in the centre of the island and a bridge towards the south-west. Travel is from either Brimhaven to the north-west, by a gnome glider route that lands players south of the Ship Yard, by fairy ring code CKR, by the charter ship, or by the agility shortcut from Musa Point.

This rather large area features some cities (see below), the Nature Altar for Runecraft, a mine, and an area near Cairn island used to trap Horned graahks in the Hunter skill. There are also several aggressive monsters in the jungle like Jogres and Jungle spiders. Some of the monsters are poisonous.

This village is also the start point for Jungle Potion and Tai Bwo Wannai Trio quests.

The Ship Yard is a shipbuilding facility featured in The Grand Tree and Monkey Madness I quests. Here, you can find workmen working and also hammers around the place. After completing The Grand Tree quest, you can use the charter ship to get to other parts of RuneScape. Also, you can get here by the Gnome glider south of the Ship Yard.

Its general store is the best to place obtain a large number of empty vials due to its proximity to the bank, and its fishing spots are good for training fishing.

The Kharazi Jungle is the southernmost part of whole Karamja and is heavily involved with the Legends' Quest. A machete and a woodcutting axe is needed to hack the thick bush in order to access the jungle properly. It is inhabited by Oomlie birds, jungle wolves and Jungle savages.

It is used during the Legends' Quest and RFD, but it is rarely used for anything else, other than Treasure Trails and occasionally to cut Mahogany trees.

These songs are from the Karamja and Pirate playlist.