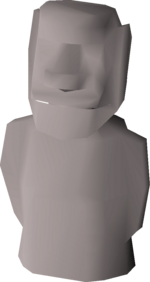 The tribal statue from Tai Bwo Wannai, dedicated to the Karamjan gods.

The Karamjan gods are a pantheon of deities worshipped by the tribal people of Karamja.[1] The people of Karamja tell little of their gods to outsiders, making their origins and nature a closely guarded secret.

The gods are most prominently alluded to during the Jungle Potion quest, during which the elderly priest Trufitus Shakaya of Tai Bwo Wannai Village wishes to commune with them. To do this, Trufitus must prepare a ceremonial collection of herbs, which will place him in a mental state that will supposedly allow him to speak to the "spirits". Apparently, the gods were angry with the villagers, who fled as a result, although the ritual apparently settled their relations.[2] According to Trufitus, the gods have now been placated.[3] The three sons of the village chief, Tinsay, Tamayu and Tiadeche, had also fled, but were returned by an adventurer in the Tai Bwo Wannai Trio quest. Tamayu also calls upon the gods during the latter quest to witness his triumph over the Shaikahan.

The still-used idol constructed in Tai Bwo Wannai's centre is perhaps the most prominent indication of deity worship, its powers imbuing those who pray at it with holy energy much like the altars of other gods.