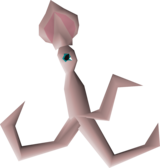 Karamthulhu are a squid-like species that are sometimes obtained while fishing for slugs during the Rum Deal quest. They are also dropped by zombie pirates and zombie swabs.

Karamthulus can be used during Rum Deal in addition to sluglings to make unsanitary swill. After the quest, any Karamthulhus remaining in the inventory will disappear, and an attempt to fish for them triggers the response, "You have no need to do that any more."