The Karuulm Slayer Dungeon is a dungeon located beneath Mount Karuulm, which is located just west of Lovakengj. It contains a variety of monsters, as well as draconic creatures not found anywhere else. Upon entering the dungeon, players will encounter a chamber with the Tasakaal, the masters of the Kahlith just above; they will not converse with players until The Ascent of Arceuus quest. This chamber also contains a pipe shortcut requiring 88 Agility which leads players outside the Alchemical Hydra's chambers, taking the same time as traversing past the nearby hydras.

As the dungeon is found inside a volcano, players who wish to explore further beyond the entrance chamber must wear the boots of stone, boots of brimstone or granite boots to protect themselves from the extreme heat of the dungeon floor. If players attempt to explore further without one of these boots, then they will be warned of the consequences; if players proceed regardless, they will be rapidly burned, taking 4 damage every tick, which can quickly kill the player.

Additionally, players that have completed the elite Kourend & Kebos Diary can wear any type of footwear, or no footwear, without being rapidly burned.

Throughout the dungeon, players can find opened stone chests which can be searched for some old notes. These are written by a Dragonkin named Karuulm, and documents the various projects he's worked on in creating the draconic inhabitants of the dungeon. Players can compile all the old notes into the Mount Karuulm diary, which documents Karuulm's notes in a chronological order.

The dungeon itself is single-way combat. A dwarf multicannon can be used in all areas here except the wyrm and Alchemical Hydra areas; the former states that the electricity the wyrms discharge would render the cannon useless, and the latter states that it would destroy the chemical containers. 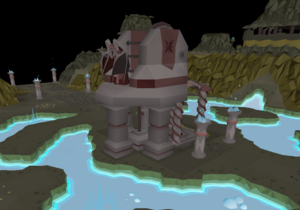 The entrance to the slayer dungeon.