The region consists of a rocky mountain known as Mount Quidamortem to the south, and a sulphurous volcano known as Mount Karuulm to the north. Between these two mountains lies a large piece of land with very fertile soil and the Kebos Swamp. The fertile land and the swamp are separated by the River Molch, which runs between the two.

Players can travel to the Kebos Lowlands by walking to the Battlefront north-west of Shayzien or by traversing the rocky terrain south-west of Lovakengj. Players can also reach the region by walking past the Shayziens' Wall, but this is not recommended unless they are travelling to Mount Quidamortem, as aggressive lizardmen are found directly west of the Wall; the aforementioned methods are safer for players seeking to reach the northern part of the region. 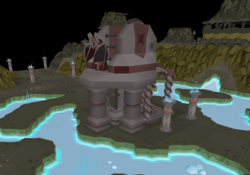 An elevator that leads to the bottom of the volcano, where Karuulm's experiments are found.

Sometime during the God Wars, before the arrival of refugees that would go on to found Arceuus, Lovakengj and Piscarilius, the continent of Zeah was uninhabited and untouched by the war, until the arrival of a Dragonkin named Karuulm, who travelled to Mount Karuulm to find a way to lift the Curse ailing his kind[2] without interruptions from his fellow kin.

During his stay in Mount Karuulm, he had managed to create wyrms, drakes and hydras, creatures he had thought of creating but were rejected by Kerapac,[3] who preferred to focus on his dragons.[4] His final creation was the Alchemical Hydra, who he viewed as a failure due to being unable to replicate it.[5] Soon after, he leaves the volcano for Mount Quidamortem, where he would go on to create the Great Olm.[6] 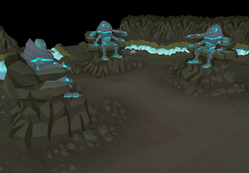 After an unknown amount of time passed after Karuulm's departure from Mount Karuulm, three TzHaar, unable to stand by and wait for their master after watching the world fall into disarray and the anima, the life force of the world, being endangered, they left the Karamja Volcano and arrived at Mount Karuulm, where they have renamed themselves as the Tasakaal,[7] and created the Kahlith, their servants, to aid them in keeping life in check by maintaining "the balance": For every death, there must be life. For every life, there must be a death. Despite this philosophy, they claim to not be a servant of Guthix, whom they call a pretender.

During Great Kourend's 36th decade (1,050 years ago), King Shayzien VII ordered an expedition to explore the Kebos Lowlands as part of a plan to expand the kingdom's territory. The initial surveying of the region resulted in the discovery of Mount Quidamortem,[8] and a subsequent expedition led by Magnus Rimor was assigned to ascend the mountain and return with details of their findings.[9] However, none returned. Assuming the party perished in the field, the expedition was declared a failure.[10]

However, King Shayzien VII would later use a small cave within the mountain to secretly create an unstable altar which acted as an amplifier for the Dark Altar's power, as well as experimenting on the native lizards to create the lizardman, which he would use as his army to rule Kourend as Xeric a decade later. 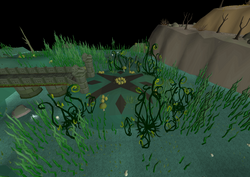 What formerly were flatlands and lush flora have now become a swamp due to Xeric's experiments within his Chambers.

After Xeric's exile from Great Kourend in the 47th decade (940 years ago), Xeric no longer had the Dark Altar's power to sustain his immortality,[11] so he and the rest of his followers travelled west to Mount Quidamortem, where his artisan Tekton built a massive underground complex for him to use cave's crystals and the magic within them. In addition, the unstable altar he had ordered to be built in the small cave within the mountain would help maintain his immortality, as it allowed the Dark Altar's power to reach places where it normally couldn't by amplifying its power.[12]

During this time, Xeric's experiments on the mountain caused a strange mist to surround it,[13] causing a dramatic change in the flora around the mountain, rotting the lush greenery and causing the open flatlands to become sodden and impassable,[14] creating the Kebos Swamp.

Today, nearly 940 years after Xeric's exile, the region remains swarming with lizardmen, who have never ceased in their attempts to reclaim Kourend. Because of this, Shayzien had closed off the western border of the kingdom[15] until recently, when the Shayzien Army successfully pushed back the lizardmen, allowing citizens and adventurers alike to explore the Lowlands.[16] 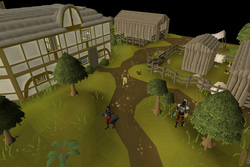 A large farm in the Kebos Lowlands just by the River Molch, with Shayzien soldiers guarding the area.

Soon after reopening the western border, Hosidius explorers discovered that the soil in the land just south of Mount Karuulm is extremely fertile,[17] prompting Lord Kandur Hosidius to make a deal with his brother-in-law, Lord Shiro Shayzien, to clear out the lizardmen in the area to build and maintain the Farming Guild.[18]

Because of the proximity of the lizardmen across the River Molch, a detachment of sergeants, soldiers and rangers have been assigned to the area to guard the farmers in the event of an attack, where they can then quickly call reinforcements from the Battlefront.[19] However, as the lizardmen are focusing their efforts on invading Great Kourend just east of there, none have attempted to cross the River Molch that separates the area from the Kebos Swamp.[20]

With the influx of humans arriving on Mount Karuulm, the Kahlith have also begun to engage in small businesses to help the humans with maintaining the balance that they and their masters seek to achieve.[21]

The Battlefront is the large battlefield just outside the borders of Great Kourend. It is where the majority of Shayzien soldiers fight the lizardmen to keep them from invading the kingdom.

Molch is a small village north of the Kebos Swamp. It contains the Lizardman Temple, where smaller variants of lizardman shamans reside.

The Farming Guild is a large greenhouse founded by Hosidius farmers. It has three sections, with each section requiring a higher Farming level than the previous to enter.

The guild contains many farming patches, in addition to some exclusive to the guild.

Lake Molch is a large lake found in the eastern side of the Lowlands, bordering Shayzien. Here, players can speak to Alry the Angler to engage in aerial fishing, a Fishing and Hunter training method where players can hunt for various fish and salamanders with a Cormorant, much like Falconry where players hunt kebbits with a gyr falcon. 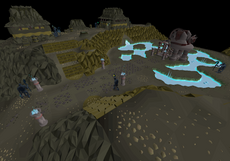 The summit of Mount Karuulm, where the settlement of the Kahlith is located.

Mount Karuulm is a sulphurous volcano found on the northern edge of the Kebos Lowlands, and as such has lava that appears bluish due to the combination of sulphuric gases and lava. Here, the Tasakaal, a variation of the TzHaar race, make their home.

The Karuulm Slayer Dungeon is located within the volcano. Inside, many draconic creatures created from the experiments of Karuulm, such as the wyrm and hydra, can be found.

On the top of the volcano is the home of the Kahlith, former humans who have abandoned their previous lives in the name of the Tasakaal. Together, they work together to maintain the balance between life and death. Konar quo Maten, a slayer master, resides here.

A bank with a deposit box and poll booth can be found here, as well as a furnace and a weapon shop that sells some low-level weapons. 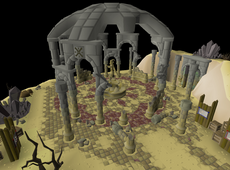 The summit of Mount Quidamortem, containing some ruins of a temple once dedicated to Xeric.

Mount Quidamortem, translated as "certain death" in Latin, is a large mountain towering over the surrounding Lizardman Settlement and Kebos Swamp. On the mountain's summit, the Chambers of Xeric, a large underground cave system containing many dangerous creatures, can be found. Mountain trolls can also be found below the mountain.

Just east of Mount Quidamortem lies the Lizardman Settlement. Here, players can find many lizardmen, and their shamans can be found in the Lizardman Caves beneath the settlement.

In addition, Xeric's Shrine is found between the Lizardman Settlement and Molch. The Swamp Priest can be found here, and the shrine acts as an altar to restore prayer points.

A small waterfall found in the southern edge of the Lowlands, Lacerta Falls currently serve no purpose other than being scenery.

Main article: Getting Ahead

There is a small farm south of the Farming Guild owned by Gordon and Mary where the quest Getting Ahead takes place.