From Old School RuneScape Wiki
Jump to navigation Jump to search
The RuneScape Wiki also has an article on: rsw:Keldagrim Trading 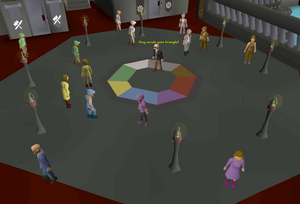 The Keldagrim Trade Octagon, where the minigame would have taken place.

Keldagrim Trading was an unreleased minigame developed by Mod Vincent, planned for the Trade Octagon on the first floor of Keldagrim Palace. The minigame would have focused on merchanting, and involved speculating on the fluctuating prices of the items sold by the dwarven traders.[1][2]

At some point in 2005, a minigame minimap symbol was accidentally added to the Trade Octagon. The symbol was subsequently removed, and Mod Vincent stated on the RuneScape Official Forums that a minigame was indeed intended for the area, but it kept being pushed to the bottom of his work pile.[confirmation needed] Implementation of the minigame didn't get past the prototype stage, with Vincent saying that he "wasn't able to get this activity to work after all", and he subsequently resigned from Jagex later that year.[3] Despite this, assets relating to the minigame would manage to find their way into the game in subsequent years.

The music track The Trade Parade and two jingles composed for the minigame were added to the live game files on 27 September 2005, alongside an updated version of Tale of Keldagrim, which the music track and jingles were based on. The Trade Parade was updated alongside all other songs with the 6 March 2007 audio update, and then reworked and released on 26 November 2007 as the music for the Grand Exchange. Unlike the later Grand Exchange version, the original versions used instruments similiar to Tale of Keldagrim.

Some of the models intended for the minigame were added to the live game files on 13 June 2006, alongside the Warriors' Guild. These included papers which would presumably serve as backgrounds for an interface, numbers from 0 to 9 in green, yellow, and red, an exclamation mark, symbols of the nine Trade Octagon companies, and two models for the octagon itself. Interestingly, The Orange Flame is included as one of the companies, despite not appearing in-game until the release of RuneScape High Detail on 1 July 2008, when banners representing them replaced those of The Red Axe after completion of The Giant Dwarf quest.