From Old School RuneScape Wiki
(Redirected from Keldagrim mine cart system)
Jump to navigation Jump to search
The RuneScape Wiki also has an article on: rsw:Mine cart
"Minecart" redirects here. For the other minecart system, see Lovakengj Minecart Network.

A player riding a minecart to Keldagrim.

Keldagrim minecarts are a system of transportation often used to travel to and from the dwarven capital, Keldagrim. Players must have started The Giant Dwarf quest to use this travel method. It is one of three ways to enter Keldagrim directly.

The Cart conductors charge a small fee (100 to 150 coins, halved while wearing a Ring of charos (a)) to travel using the minecart system. Travels from the Grand Exchange to Keldagrim and vice versa are free of charge.

The Keldagrim Carts hub station is in the south-east corner of Keldagrim, near the Blast Furnace factory. From here, it is possible to travel to and from all of the stations, whereas others may only may take the player directly to Keldagrim.

Minecarts are some of the dwarves' most advanced technology. Powered by the somewhat recently discovered steam engine technology of the dwarves, the carts can travel over long underground distances very quickly. While originally designed to carry ore to and from the city, the carts are also capable of transporting dwarves and humans.

The minecart system offers three routes to travel to places across Gielinor.

The Dorgesh-Kaan-Keldagrim Train System unlocked during the Another Slice of H.A.M. quest also docks in the Keldagrim hub and is essentially a mass-transit version of the minecarts that connects to Dorgesh-Kaan. However, it functions somewhat differently and is usually considered a separate mode of transport. 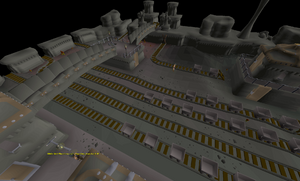