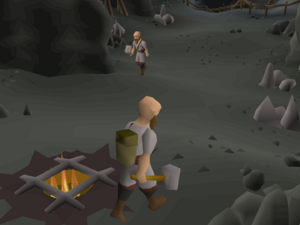 The Keldagrim South-west mine can be accessed by paying 2 coins (per journey) to the dwarf by the Dwarven Ferryman (not the boatman), found just after the Rellekka tunnel entrance to Keldagrim. This mine is particularly useful when completing The Giant Dwarf quest. Otherwise, however, it is many clicks and a good distance from a bank, and thus is not a very efficient spot to mine.

There are two walking channels joined by an east walkway the following ores can be found:

Nine iron and two mithril rocks can be found outside Keldagrim, just outside the Keldagrim tunnel at the mapped "Keldagrim Entrance" east of Rellekka.

Five coal and two copper rocks can be found in the mining patch south-east inside Keldagrim, just east of the inside entrance to Keldagrim.