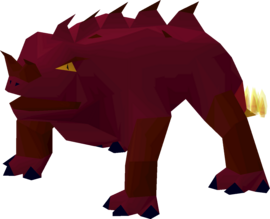 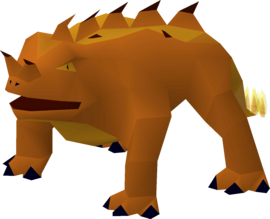 The Ket-Zek is a monster found in the TzHaar Fight Cave. They begin appearing at wave 31.

An orange Ket-Zek is fought on wave 62, the only wave in which the player encounters two of them at once. The orange Ket-Zek's spawn location marks the spot where TzTok-Jad will spawn on the next, final wave.

It uses powerful melee and magic attacks, both capable of hitting in the high 40s. For this reason, the prayer Protect from Magic is necessary. Its magic attack is depicted as a fire ball flung from the tail. It will lunge at players who get too close to it.

It is best to dispatch a Ket-Zek with ranged, as while it is just as weak against melee attacks, staying in the Ket-Zek's melee distance results in unnecessary damage. The twisted bow can easily kill a Ket-Zek due to its high Magic level.