The Kharazi Jungle is an area south of Shilo Village on Karamja. This is where most of the Legends' Quest takes place, and it is necessary to start the quest in order to enter the jungle (you only have to talk to Radimus Erkle and receive Radimus notes). A machete and a Woodcutting axe are required to hack through the dense jungle blocking the path along with the notes. Radimus notes is required to navigate it if players have not completed Legends' Quest.

The jungle occasionally serves as the location for Treasure Trail co-ordinates. 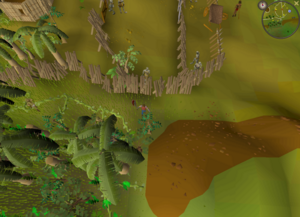 This spot is the easiest way to enter the jungle from Shilo.

The jungle is home to the Kharazi tribe and several species of wolves, birds, and other animals, most of which are aggressive. To the north-west is the entrance to the Viyeldi caves which has a role in Legends' Quest. Along the southern beach are several vanilla plants, which players will find a use for during the Sir Amik Varze subquest of Recipe for Disaster. Roughly in the centre of the jungle is a pond with special water and near it is a location where special Yommi trees may be planted. Along the jungle there are several black totem poles which players will have to get rid of during Legends' Quest. 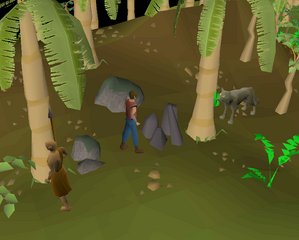 The entrance to the Viyeldi caves.

This location is also visited again for the deathwing, oomlie wrap, and palm leaf tasks from the Karamja Diary. A palm leaf can be retrieved by shaking the leafy palm trees to the east and west of the small pool in the centre of the jungle. When shaken, a leaf will appear on the ground.

To the south-east is the Karamjan Temple, which is visited during Dragon Slayer II in order to find one of the dragon key pieces.