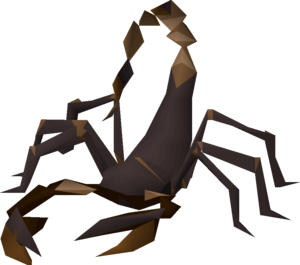 Kharid Scorpions are a rare species of scorpion native to the Kharidian Desert. They play a prominent role in the Scorpion Catcher quest, during which players must capture three that escaped from the wizard Thormac. Players can catch them during the Scorpion Catcher with a scorpion cage. Locations are as follows:

None of these scorpions are attackable. If players attempt to pick them up, they will always suffer 3 Hitpoints of typeless damage. This damage can kill the player if they have 3 HP or less when attempting to pick one up. The scorpion damage is not poisonous, though it is typeless (similar to damage from failing to pickpocket) and therefore unaffected by protection prayers. Some players may use them as a form of suicide when they have low Hitpoints or are in need of stat healing.