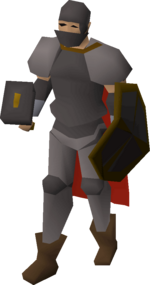 The Khazard warlord is the boss that players have to fight during the Tree Gnome Village quest. He drops two of the Orbs of protection needed for the Spirit tree. He is a very dangerous foe armed with a Khazard warhammer, and can hit very accurately up to 10 damage. He is also wearing a Khazard platebody and a dark coloured Spiny helmet without the spikes. Even though he attacks with a warhammer, he has the attacking speed of a scimitar. During Tree Gnome Village, the player confronts the warlord, and demands the orbs from him. The Warlord refuses and then attacks the player. When the player has killed the warlord, they can search the warlord's satchel and find the two remaining orbs. The player then needs to bring these back to King Bolren in order to complete the quest. It is advised to have adamant armour or better when fighting him.

Low level players should strongly consider bringing food and prayer potions if they plan to use melee, and even then may not be able to kill him.

The Khazard Warlord led the charge when General Khazard ordered his men to invade the Tree Gnome Village. When the player stole the first orb, and returned it to King Bolren, Bolren informs the player that the Warlord and his troops came in and killed gnome women (among them his wife) and some gnome children, and took the other two orbs. The player then is told to kill him.