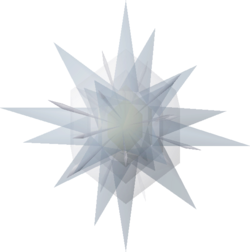 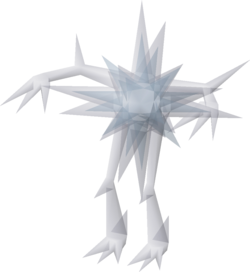 Killerwatts are Slayer monsters located in the Killerwatt plane, accessible through a portal at the top floor of Draynor Manor. A Slayer level of 37 as well as the completion of Ernest the Chicken is required in order to kill them. If a player is not wearing a pair of Insulated boots while fighting them, their Ranged attacks will have a much higher maximum hit. Just like their standard ranged attacks however, this damage can be mitigated using Protect from Missiles. A Dwarf multicannon cannot be set up in the Killerwatt plane.

Killerwatts are a commonly skipped Slayer task due to their relatively high damage output combined with their mediocre drops.

Killerwatts initially appear as passive floating orbs of electricity, once clicked though they will immediately grow limbs and become hostile. As soon as they are clicked, Killerwatts will attempt to get into melee range, regardless if the player cancels the attack or not and will continue to do so until it dies, the player leaves the Killerwatt plane, dies or logs off.

Killerwatts are much more dangerous than what their combat level may suggest; both their Ranged and Melee attacks have an attack speed of two ticks, thus attacking players every 1.2 seconds, twice as often as say an Abyssal whip or a Scimitar. On top of this, their melee attacks are exceptionally accurate.

There are two recommended ways to fight the Killerwatt, depending on choice of player equipment and preference. The first is to simply safespot the Killerwatts using the nearby clouds or over the holes of the plane; while they will still attack you using their ranged attacks, it will remove their ability to use their more accurate melee attacks and instead only try their Magical ranged attacks against your Dragonhide armour. The second technique revolves around 'attacking' them with a melee weapon equipped then canceling, making them engage the player first. This will force the Killerwatt to attack the player using only their melee attacks, which while accurate, can be tried against the players melee armour.

All the Killerwatts attacks can be mitigated using Protection prayers and while difficult, can even be Prayer-flicked.

Drop rates estimated based on 63,929 kills from the Drop Rate Project, unless otherwise cited.

The average Killerwatt kill is worth 783.76.

There is a 5/140 chance of rolling the gem drop table.