King's Ransom is the final quest in the Camelot quest series.

{"requirements":"*[[File:Magic icon.png|21x21px|link=Magic|alt=Magic]] 45 [[Magic]] <sup title=\"This requirement is unboostable\" style=\"cursor:help; text-decoration: underline dotted;\">(unboostable)</sup>\n*[[File:Defence icon.png|21x21px|link=Defence|alt=Defence]] 65 [[Defence]] <sup title=\"This requirement is unboostable\" style=\"cursor:help; text-decoration: underline dotted;\">(unboostable)</sup>\n*Completion of the following quests:\n**[[Black Knights' Fortress]]\n**[[Holy Grail]]\n***[[Merlin's Crystal]]\n**[[Murder Mystery]]\n**[[One Small Favour]]\n***[[Rune Mysteries]]\n***[[Druidic Ritual]]\n***[[Shilo Village]]\n****[[Jungle Potion]]","desc":"Life has been quiet at the Sinclair Mansion since you discovered the murderer... too quiet. So quiet, in fact, that the family has gone!\n\nSuspicions are running high that the Sinclairs' recent departure is tied to the disappearance of King Arthur and his knights. But time is running short and clues are scarce, will you crack the case in time?","difficulty":"Experienced","kills":"None","name":"King's Ransom","start":"Talk to the [[Gossip]], outside [[Sinclair Mansion]].","length":"Medium","items":"*[[Granite]] (any size)\n*[[Telekinetic Grab]] runes (can be obtained during the quest)\n*Full [[black armour]] ([[Black full helm|helmet]], [[Black platebody|platebody]], and [[Black platelegs|platelegs]]/[[Black plateskirt|plateskirt]])—'''NOTE:''' Trimmed versions of black armour will work. (h) versions will NOT work\n*A [[bronze med helm]] (can be purchased from [[Peksa]]'s [[Helmet Shop.]], in the [[Barbarian Village]], or picked up inside [[Draynor Manor]] near the exit)\n*An [[Iron chainbody]] (Both the [[Iron Chainbody]] and the [[Bronze med helm]] can be bought upstairs in the [[Warrior Guild Armory]]. If you can't access the [[Warriors' Guild]] you can get an [[Iron Chainbody]] from [[Wayne's Chains]] in Southern [[Falador]], [[Horvik's Armour Shop]] in central [[Varrock]], or the [[Grand Exchange]])\n*[[Animate rock scroll]] (obtainable during the quest). Note: if you have it in your bank, either destroy it or take it with you. You won't be able to receive another from [[Wizard Cromperty]] otherwise.\n'''Recommended:'''\n*A teleport to [[Ardougne]] to talk to [[Wizard Cromperty]]\n*A teleport to [[Camelot]] for a quick access to [[Seers' Village]] and [[Camelot]]\n*A [[combat bracelet]] or [[amulet of glory]] for fast access to the [[Edgeville Monastery]]\n*A [[Dramen staff]] or [[Lunar staff]] with code <span class=\"fairycode\"><b>c</b><b>j</b><b>r</b></span> for quick travel to [[Sinclair Mansion]]\n*[[Salve graveyard teleport]]s for quick access to fairy ring"}

Note: You will need to be on the standard spellbook to complete this quest (unless you have 96 Magic for spellbook swap and Lunar Spells). Go switch back to standard spells if you aren't on them already.

To begin the quest, speak to Gossip outside the Sinclair Mansion, just north west of Camelot Castle. He will explain to you that the Sinclairs have packed up and left after incriminating Anna as Lord Sinclair's murderer. This, however, may not be the same person you proved to be guilty in Murder Mystery. Gossip will explain that one of the family members provided new evidence to prove Anna's guilt. He will then go on to explain that King Arthur and his knights disappeared at the same time as the family's departure. Agree to investigate, and you will start the quest.

Now, speak to the guard who suspects that the Sinclairs have something to do with the mysterious disappearance of the king of Camelot and his knights. He suspects that since Lord Sinclair gave King Arthur the castle, the disappearances may be part of a bigger plot to reclaim Camelot. The guard will explain that the Seers' Council has forbidden anyone to enter Sinclair Mansion or Camelot to investigate and will so pass on the investigation to you.

Break the window on the east side of the mansion, and you shall be inside. Now obtain the following pieces of evidence from their respective locations:

Return to the guard by right clicking the window and click on 'break' to get through, and present to him all three pieces of evidence. The guard will agree that there is enough evidence to prove bad intent towards King Arthur. He says that since he has to follow proper proceedings that he will have to wait a month before presenting the evidence. You will offer to avoid the bureaucracy. He will then suggest that you learn more about the Sinclair family history, suggesting that town gossips know much about history.

Talk to Gossip. There are three options to ask. Ask all three to learn the Sinclair history.

The first two conversations are about the family history. Gossip will explain Lord Sinclair was a good friend of King Ulthas and did many good things for Kandarin. His children, however, were spoiled and horrid, but Gossip admits he didn't think they would commit murder. The second is about the mansion. He will explain that originally the Sinclair's lived in Camelot (then, under a different name). Lord Sinclair eventually sold the castle to King Arthur and his men. They packed up and built the Sinclair Mansion. His children were furious. The third option is about Anna. Gossip will tell you that she is in the courthouse in Seers' Village, giving a really hard time to the authorities. Gossip is positive Anna will receive a guilty verdict.

Head to the courthouse in Seers' Village (the building directly south of the mansion and south-east of the bank), and speak to Anna. She will say that the original murderer you suspected set her up. She will go on to explain that no one will believe her. She says the new evidence against her was forged. You will then ask her where her family has gone; she will say she doesn't know since she's been locked up. As you go to leave, she will make a deal to help you get into Camelot in exchange for help in receiving a not-guilty verdict. She will then hand you the criminal's thread that you found on the window in Murder Mystery. Anna will suggest that the servants may be able to provide testimony in her defence.

Note: It is possible to skip the following section and obtain a not guilty verdict. Just walk down the stairs in the courthouse, and the trial will begin. Asking the servants questions does not advance the quest and is only purposeful for those who wish to do so or want to (re-)solve the case themselves.

Return to the mansion to learn what the various servants will state during the trial. There are six in total, two of them being located outside of the mansion and the other four being located within it (once again, enter via the broken window to get inside). Ask them every possible question.

The first question will gather information on what happened the night of the murder.

The second question will gather information on where they last saw Anna on that fateful night.

The third question will gather information on whom they ever saw handling the dagger.

The fourth question will gather information on whom the thread may belong to.

The fifth question will gather information on the poison.

After talking to every servant (six in total), head to the lower level of Seers' Village courthouse to begin the trial. 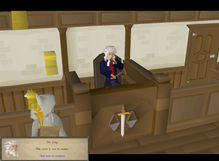 To successfully clear Anna of the charges, you must rebut this evidence without accidentally providing more incriminating evidence against Anna (for example, bringing out testimony which puts Anna near Lord Sinclair's meal before he died). To do this, call the following witnesses with the following questions:

The judge will end the trial and ask for a verdict. The jury will provide a not-guilty verdict against Anna.

Back to business[edit | edit source]

Leave the courtroom by clicking the gate; then, talk to Anna in her cell. She will go back to being rude, but will tell you how to enter Camelot. Head to the east side of Camelot Castle, and search the statue near the temple. 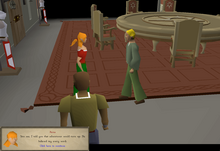 You will now see a cutscene of Anna talking to David. The siblings were both responsible for Lord Sinclair's death, and set you up to trap you. They will explain they have no intention to help you. Suddenly, Morgan Le Faye will appear and knock you out with her staff.

After being knocked out by Morgan Le Faye, you will wake up in a jail with Arthur's Knights and Merlin.

Speak to Merlin. He will explain that:

Ask Merlin what to do. Follow all of the available conversation options.

Click on the vent at the top of the wall opposite the jail gate. A funny animation will show Merlin escaping with the help of all the knights making a pyramid allowing him to reach the vent.

Note: If you need to leave during this portion of the quest, click on the vent again and the knights will lift you out of the cell. To continue the quest later on, make your way back to Camelot and click on the gates to be teleported back into the cell by Morgan Le Faye. 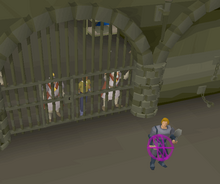 Talk to all the knights, and ask them if they have anything useful to help them escape. You will get a lot of items such as an air rune, a law rune, an empty vial, a cooked shark, a normal log, a bottle of vodka, etc. If you received a lockpick, use it on the metal door; otherwise, use Telekinetic Grab on the guard fixing his hair outside the cell to obtain a hair clip. Use the hair clip on the metal door.

You will need to solve a puzzle to unlock the jail lock. The puzzle very closely resembles the popular game Mastermind.

To complete this puzzle, you must set each of four tumblers to the correct height. The most foolproof way to do this (not necessarily the quickest) is to set all tumblers to the lowest height of 0/5, and try the lock. If a tumbler shows a green circle, do not change that tumbler anymore. Ignore blue and red circles. For all the other tumblers, increase the height by one and try again. Continue until the lock unlocks. This method will take at most six attempts.

You will emerge on the ground floor of the Keep Le Faye. Arthur's knights will be engaged in battle with the Renegade Knights.

Riddle to the Holy Grail

Head to the top floor and search on the table to the north. You will now have to solve a riddle (click on Show riddle) and choose the correct container holding the holy grail. The correct box is the round purple one on the right, second last box if counting from left to right.

Note: Some of the boxes contain a trap which will teleport you outside of Keep Le Faye to South-west Ardougne. To continue the quest, you will have to walk back to Keep Le Faye. When you try to open the door, Morgan Le Faye will appear and will teleport you back to jail. There, you don't need to solve the door puzzle again—you just have to open the door and walk back to the top floor.

You must now free King Arthur from his stone prison. Head to Wizard Cromperty in East Ardougne.

Cromperty will explain you need to free King Arthur like you did to Petra Fiyed during One Small Favour, though this time, you also need to unravel Morgan's spell. He will give you an animate rock scroll—you will need to use on King Arthur once you have both the holy grail and some granite in your inventory.

Note: Even if you already have the Animate scroll, you will still need to go talk to Wizard Cromperty, or your player will not be willing to cast the spell on King Arthur. BE SURE TO COMPLETELY FINISH THE DIALOGUE AFTER RECEIVING THE SCROLL, OR YOU WILL NEED TO RETURN AND SPEAK WITH HIM AGAIN.

Tip: Get the bronze med helm and iron chainbody in Draynor Manor and at Wayne's Chains in Falador respectively if you still need them.

Climb down the ladder, and you will see King Arthur's statue. Use the free option.

Talk to King Arthur, and give him the guard uniform (bronze med helm and iron chainbody).

Return to Camelot and speak to King Arthur in his castle to finish the quest and receive your reward. 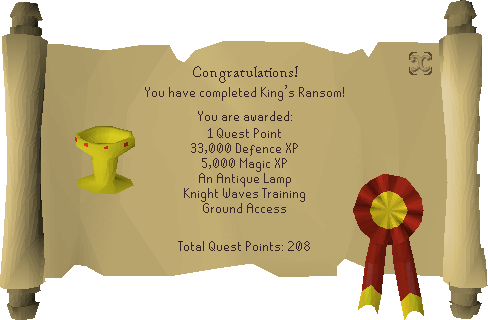