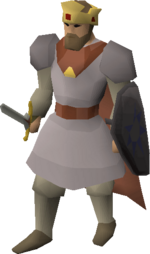 King Arthur is the king of Camelot Castle which is east of Seers' Village. Arthur is the leader of the Knights of the Round Table and an ally of the White Knights.[1] King Arthur is found on the ground floor and is involved in three quests: Holy Grail, Merlin's Crystal, and King's Ransom.

After completing the Holy Grail, players can mount a painting of King Arthur on a wall in their Player-owned house.

King Arthur arrived to Gielinor in 132 of the Fifth Age, where the Knights of the Round Table were to remain until their aid was needed again in England. (When speaking to the Guard at the beginning of the King's Ransom quest, when you ask if Arthur and his Knights's disappearance could be due to their returning to their own realm, the guard will enigmatically respond that there is no evidence to suggest that.) At the time, King Ulthas still held the throne of Kandarin. Once in Gielinor, King Arthur sought to find a new castle to house his Knights.

King Ulthas, wishing to aid King Arthur, spoke with Lord Sinclair, an important political figure who had taken up residence in a mansion east of Seers' Village. Sinclair agreed, deciding Arthur's need was greater than his. He left the mansion to Arthur, relocating himself and his children to a small mansion near the southern border of the Fremennik Province. His children, though, never forgave him for leaving their home, eventually leading to his murder.

King Ulthas died shortly after, leaving the throne to his sons Lathas and Tyras. King Lathas, the ruler of East Ardougne, disagreed with his father's decision to give the Knights Camelot, and to this day wishes to reclaim the mansion and have the Knights killed. To do this, he has allied himself with the mourners of the elven Iorwerth Clan, whom he believes will aid him in his future attack.