The King Black Dragon, commonly referred to as KBD, is a three-headed dragon located in his lair, accessible only through the deep Wilderness. The lair itself is not in the Wilderness and he is not considered a wilderness boss. The King Black Dragon has a combat level of 276, which makes him one of the strongest dragons in Old School RuneScape. Players should not take this foe lightly, and they should always take an Anti-dragon shield as his dragonfire breath is very deadly without protection. The King Black Dragon can also be killed as an alternative for a black dragon Slayer task.

Although he will always fight back when attacked, he has gotten bored over the centuries from adventurers attacking him, as he revealed to his good friend Bob the Cat.

While the King Black Dragon's lair is entered from within the Wilderness, his lair itself is not part of the Wilderness, so players cannot attack each other in his lair. Completion of the Wilderness Diary also does not note his bone drops, and the KBD does not count towards a black dragon slayer assignment given by Krystilia.

Players can pay 50,000 coins to open an instanced version of his lair (right-click Private option on lever), where it will be inaccessible by other players. This fee can be deducted directly from the bank; players do not need to carry coins on them to create the instance. Dropped items in this instance will disappear after 180 seconds.

Warning: As the entrance to the King Black Dragon Lair (aka KBD Lair) is located in the Wilderness, watch out for player killers! 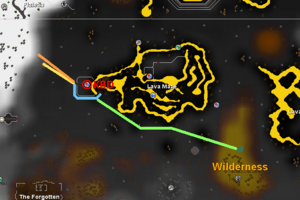 The routes that lead up to the KBD Lair. 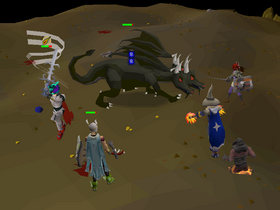 A group of players take on the King Black Dragon.

In addition to his damaging attacks, the King Black Dragon can also poison the player and reduce the player's stats. It is strongly recommended to bring anti-poison (Antidote++ is preferred) and stat-restoring potions such as Super restores.

His dragonfire is significantly stronger than normal dragonfire, with a max hit of 65 with no protection, 15 with the Anti-dragon shield or Dragonfire shield, and is completely blocked with both the shield and Antifire potion. Because the max damage is so high, the player should always have one of these shields equipped.

In addition to his regular dragonfire, the King Black Dragon has three unblockable breath attacks: Poison, Shock, and Freeze. Although an antifire potion reduces damage from these attacks by 75%, it will only nullify all damage from the regular dragonfire. With the anti-dragon shield or equivalent equipped, they only deal up to 10 damage. Protect from Magic does not protect against or reduce damage of dragonfire when an anti-dragon shield or equivalent is equipped. However, if no anti-dragon shield is equipped, Protect from Magic will reduce the max hit of these attacks from 50 to 20.

Killing the King Black Dragon for a key to open the closed chest in the north-east corner of his lair is the solution to an elite cryptic clue: Scattered coins and gems fill the floor. The chest you seek is in the north-east.

King Black Dragon as he appears on the Postbag from the Hedge stamp.
Retrieved from ‘https://oldschool.runescape.wiki/w/King_Black_Dragon?oldid=14292070’
Categories:
Hidden categories: