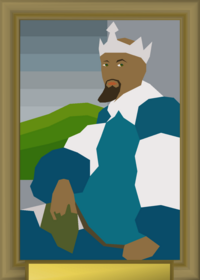 A portrait depicting an artist's impression of King Byrne I.

King Byrne I was the king of Great Kourend, ruling from the 47th to 50th decade. Byrne, working as a farmer, one day witnessed a child working on the same field being murdered by a lizardman guard. Outraged, he singlehandedly killed the lizardman, having the whole town as a witness. Urging people to fight back, he started the revolt and within 7 days, the lizardmen were outnumbered and driven beyond the kingdom's grounds to the Kebos Lowlands. During the rebellion, the temple that surrounded the Dark Altar was demolished, further weakening the powers of Xeric and forcing him to exile, travelling west to Mount Quidamortem.

Player can find Byrne's coronation speech in the Arceuus Library.