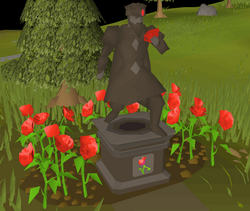 A statue of King Kharedst IV, the last King of Kourend.

King Kharedst IV was the last king of Great Kourend, before the Kourend Council overtook the position as rulers of the kingdom.

Approximately 31 years ago, King Kharedst IV's wife died giving birth to Rose, his only daughter.[1] Some time during her childhood, he gave her a memoir for her to record their outings, so that he can reminisce the times they've spent together.[2] During these outings, they would occasionally dress down to experience the life of the people of Great Kourend.[3] Rose and her father also often wrote riddles for each other as well.[4]

The day before Rose's 11th birthday, she and her father made their monthly trip to Lovakengj, where he purchased an ornate flask and an old rose-shaped locket from an old dwarf tinker.[5] The locket was given to Rose as a present, whilst he purchased the flask for himself.[6] Unbeknownst to the King, the flask he purchased was corrupted with dark magic,[7] and soon his mind became corrupted.[8]