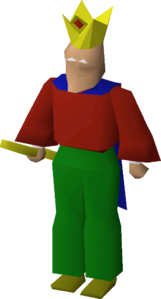 King Narnode is known to have an affection toward humans, but his high regard for the race can often be tainted and contorted through lies, as he once had the player temporarily imprisoned under false accusations.

He is also a customer in the Gnome Restaurant minigame.