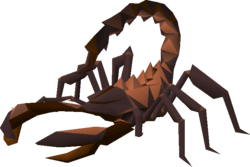 King Scorpions are aggressive monsters found in the Dwarven Mine, the Lava Maze, in the Wilderness, and some areas on Crandor. They patrol the iron, mithril, adamantite, and copper rocks in the area north of the Mining Guild door, the coal and tin rocks west of the Falador house stairs,

Lovakengj, and the mithril and coal rocks on Crandor. It stops being aggressive at level 65 outside Wilderness.