King Tyras Ardignas is the king of West Ardougne, the son of King Ulthas and the younger brother of King Lathas. He is assassinated by the player during the quest Regicide after the player is deceived by King Lathas and Lord Iorwerth.

King Tyras was the youngest son of King Ulthas, the monarch of Kandarin until his death in a hunting accident in year 136 of the Fifth Age. Prior to his death King Ulthas had declared that the throne of Kandarin and the capital city should be split between his sons. This greatly angered Tyras' older brother, Lathas, who was already angry with their father for granting King Arthur possession of Camelot.[1]

Tyras ruled over West Ardougne, he was not particularly popular, but he was accepted. Under his leadership the city of West Ardougne expanded westward all the way to the nearly impassable Galarpos Mountains, which led to the rediscovery of the Underground Pass, a long lost tunnel system between the elven land Tirannwn and Kandarin. Tyras could not resist the opportunity to explore the elven lands, and he left the city with a division of highly-trained soldiers. 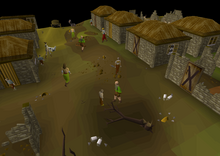 The city of West Ardougne after it went into decline.

In Tyras' absence West Ardougne went into decline, whereas East Ardougne grew in wealth and political influence. The leadership of West Ardougne was left to Tyras' inexperienced subordinates, which led to a plummeting public morale and made Tyras very unpopular. Tyras returned briefly with his surviving men after having spent some time in Tirannwn to resupply and recruit new soldiers, but he left shortly after to venture back to Tirannwn.

Shortly after Tyras' departure the Underground Pass was taken over by Lord Iban who corrupted it, and a "plague" swept across West Ardougne, which caused Tyras' brother King Lathas to have mourners put the city under quarantine, fortifying the city walls and sealing any entrance to West Ardougne, taking any "infected" citizens to a "medical centre" from where they never returned.

Completely unaware of these events Tyras continued his exploration. Lord Iorwerth, the elven leader of the Iorwerth Clan, who collaborated with King Lathas, saw Tyras as a foreign invader and had trackers sent out to track him down. Tyras became aware of this and broke down his camp and set up traps along the way to deter them. Tyras and his remaining men eventually reached the Western Sea, where they set up Tyras Camp and Port Tyras. Tyras would remain in his tent, never appearing even in front of his men, fearing the threat of Lord Iorwerth. King Lathas who had made a deal with Lord Iorwerth of having both Tyras and King Arthur disposed of, sent an adventurer who had disposed of Lord Iban to assist in the assassination of King Tyras.[2] 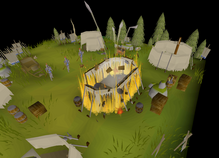 The adventurer had been told that King Tyras had brought the plague to West Ardougne and that he had been corrupted by the Dark Lord after having been forced to drink from the Chalice of Eternity.[3] Not knowing the truth, the adventurer went ahead and created a barrel bomb and used a catapult to launch it at King Tyras' tent killing him instantly. Before they could return to Ardougne Castle the adventurer was intercepted by a rebel elf, who revealed the truth of Lord Iorwerth's and King Lathas' deception.

After Tyras' death, General Hining took leadership over Port Tyras, the death of the king was a huge shock and Hining was worried about the future. Eventually the adventurer returned to the camp, when they together with the rebel elves from Lletya and the Elven clan leaders planned to fight back against Lord Iorwerth. Hining and his men lent their assistance to the elven resistance to protect the passage from the Underground Pass to the Temple of Light. After Lord Iorwerth's defeat, the end of the plague and restoration of Prifddinas, the elven clan leaders allowed Tyras Camp and Port Tyras to remain as an outpost.