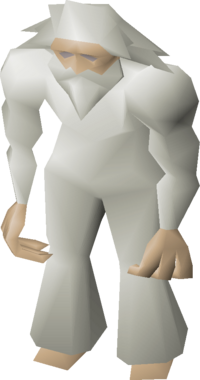 King Vargas is the king of the island of Miscellania. He was turned into a Yeti, which made him unsuitable to rule as king, and therefore he attempted to find a regent. He appoints the player as regent in his stead after completing the Throne of Miscellania quest and engaging them to one of his children.

He seems to be possessive of his land, and without the player knowing it, he seems to try to take back his land. He also occasionally makes decisions for the player when they are not there.

During Throne of Miscellania, the player has to act as a diplomat between the two fragile nations of Miscellania and Etceteria. Afterward, a treaty from Queen Sigrid will be given to King Vargas. Because of his yeti-like features (not to mention size), he cannot sign the treaty with a normal pen. The player must then get a giant pen nib from Derrik and attach it with some logs to make a giant pen for the king.

During Royal Trouble, he has an argument with Queen Sigrid and declares war on Etceteria. After the quest, the player finds out this is all a big sham, plotted by some teenagers from Rellekka wishing to complete their trials for adulthood. The player must then give King Vargas a letter from Queen Sigrid. He doesn't expect what Sigrid wrote to him, as she hinted dating him after he is cured from his yeti state. The quest will end and he will give the player a reward.