The Kinshra, often referred to as the Black Knights, are a Zamorakian military order based primarily in and around northern Asgarnia, founded in the early Fifth Age. The Kinshra were official defenders of the Kingdom of Asgarnia for roughly 155 years, although their presence within the nation was, and continues to be, a constant point of political tension. The group is currently led by Lord Daquarius Rennard.

The Kinshra were one of several groups that allied with King Raddallin in the early years of the Fifth Age (around Year 8), in his attempt to unite various small settlements and tribes into the Kingdom of Asgarnia. The Kinshra were a strong force in leading the expansion of the burgeoning kingdom, and established themselves in a fortress on the Asgarnian border to the Wilderness. Raddallin also allied with a Saradominist group called the White Knights, who were bitter rivals of the Kinshra. The White Knights were tasked with maintaining order and safety in the capital city Falador. This outraged the Kinshra, and the two organisations places in the ruling of Asgarnia has meant that Asgarnia has been in a tense political situation ever since.

When the current king of Asgarnia, King Vallance became sick in year 162, their leader Sir Amik Varze became acting ruler of Asgarnia, and in year 163, he used the opportunity to declare that the Kinshra were now without any political influence. This sparked a very dire situation in Asgarnia, and the Lord of Kinshra declared war with the White Knights and Falador. Soon after a battle between the two orders took place north of Falador, but the two factions realized that they were too evenly matched, thus they both retreated and began plotting how to destroy the other once and for all. 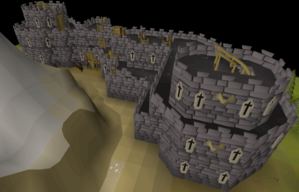 They also have a few operators around the world, such as north of Varrock, near Draynor Village and within the Wilderness.