A player kisses the frog.

Frogs are a random event. The player must kiss the frog wearing the crown, who is really a prince or princess (always the opposite of your character's gender), in order to restore them to their true form. The newly transformed prince or princess will give you a frog token for helping them, and this may be redeemed at the Varrock clothes shop to get a frog mask, or a prince/princess outfit.

Prior to random events being optional, ignoring them caused the player to be turned into a frog, and then sent to Frogland, where players must ask for forgiveness from the frog prince or princess. This would also happen if the player talked to the correct frog but refused to kiss them. As a frog, a player only has 4 buttons available: Friend and Ignore list, Log out screen and music selection. 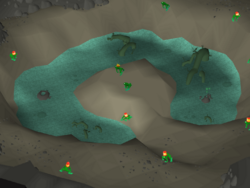 The area in which players were teleported if they ignored or refused to participate in the event.

Because random events became optional, you will no longer get teleported automatically for ignoring the event. Now the player must talk to the prince or princess then refuse to kiss them in order to be turned into a frog and sent to Frogland.