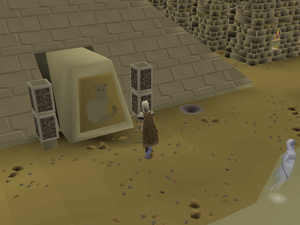 Klenter's Pyramid is one of the two pyramids in Sophanem, the other being Jalsavrah, and the final resting place of Klenter. The pyramid is guarded over by a Sphinx and can only be accessed with a cat. During Icthlarin's Little Helper, a wanderer, actually Amascut the Devourer, hypnotises an adventurer to steal one of Klenter's organs so that she may steal his soul, but Icthlarin prevents this at the last moment.

In order to progress in the pyramid, traps must be avoided. First, there are a few sets of wall crushers. Walking diagonally will avoid these. Then, the rocky path should be followed (with ground decoration on) to avoid pitfall traps. See Icthlarin's Little Helper on how to avoid the pit traps. Past the first two mummies is an automatic spawn for a scarab swarm. There are more mummies, then a pit that can be crossed, leading to Klenter's sarcophagus and organs. Another wall crusher and pitfall-infested path leads to a closed chest to the east.

The sarcophaguses in the northwest and northeast rooms can be searched during a flashback in the above quest to find 10 noted Gold bars, then an Emerald amulet (u), and finally a Sapphire necklace. After finding these three items in either room, there are no more items to find. With each search, there is a chance of spawning a scarab swarm, or getting hit 3 damage, or getting poisoned with 2 damage.

To reach the chest, players should avoid the wall crushers by walking diagonally between them. When standing with the east part of the easternmost crusher directly south, take three steps forward (east), walk one step diagonally to the south-east, and then walk forward (east) to the chest to loot it for 50 coins.