The Knight Waves are an activity located on the top floor of Camelot Castle within the Camelot training grounds (climb up on the south-western tower ladder). Players must have completed the King's Ransom quest to enter. A squire standing outside the door of the training room will explain how the Training Grounds work.

After completing the training room, players unlock the Chivalry (level 60 Prayer and 65 Defence) and Piety (level 70 Prayer and 70 Defence) prayers.

You have to fight a total of eight tough knights (all over level 100) who each will drain certain combat stats. You can not use Prayer, Ranged or Magic within the Training Ground.

One easy method of completing this minigame is to bring a poisoned dragon dagger (preferably p++), and just poison each knight and hide behind the dummies until the knights are weakened or killed by the poison. High level players with 100+ combat can easily complete this minigame with full Guthan's set and restore potions, even with no food.

Stat restore potions are vital, especially to restore your Defence as some knights can lower your Defence extremely fast. Also note that as your Defence is lowered, knights will have an even higher chance of lowering your stats.

Note: If you feel like you cannot win, it's better to let yourself die within the training ground because all stats and run energy are restored upon death, and because that way you don't have to start over at the first knight. (The squire says you must restart from the beginning if you fail, but he is incorrect.) 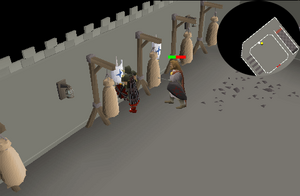 You can wait until the health bar disappears, hit, and then return to the safespot and repeat until the knight dies.

Note: You have a limited amount of time to fight each knight. The Knights will despawn if you take too long to kill them, logging out and back in will resume the fight starting on that knight. Also note that Magic, Ranged, and Prayer will not work in these fights.

If you are going to fight the knights head on, you would need monkfish, sharks or better. The knights can hit very high, up to 29 for the final knight. Keep in mind that there are 4 Defence-lowering knights, 3 Strength-lowering knights, and 3 Attack-lowering knights. With 70 Attack, 65 Strength and 65 Defence, a good strategy would be to bring a whip and fill your inventory with 2 Combat potions, 4 Saradomin brews, 4 Restore potions, a Dragon dagger and the rest with monkfish or shark.

Completion of the Camelot training room is required for the following: