Kob is the leader of the trolls of Troll Stronghold, found on the top level. He is fought during Monkey Madness II in order to convince him not to ally with the monkeys of Ape Atoll.

It is highly recommended to use the Protect from Melee prayer before speaking to him when accepting his challenge, as he can hit up to 57. Although Kob can hit through Protect from Melee, he will deal far less damage if it is active. 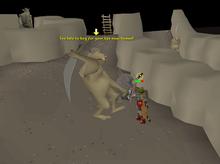 The player challenges Kob to a deathmatch.

Players can safespot Kob by running out to the door and using Ranged, Magic, or a halberd, as he will not be able to reach them. When he is defeated, Kob will beg for mercy and agree to not help the monkeys.