The Kodai wand is the strongest wand in Old School RuneScape. Requiring 75 Magic to wield, it is able to autocast both Ancient Magicks and standard spells, and provides unlimited water runes when equipped. In addition, the wand has a 15% chance of negating rune costs when casting an offensive spell and gives a 15% bonus in magic damage.

The wand is created by using a Kodai insignia, obtained as a reward at the end of the Chambers of Xeric, on a master wand. When creating the wand, the chatbox will state, "Power shoots down the length of the wand, empowering it with the darkness of Xeric's Kodai wizards." This process cannot be reverted. 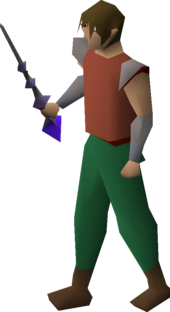