Koschei the deathless is a Fremennik warrior that players must fight during The Fremennik Trials quest, in order to complete Thorvald the Warrior's test of bravery and win his vote. The player must defeat Koschei three times without dying; although they are told they must defeat him to win, defeating him three times is considered enough to win, as the test is of bravery, not strength.

Koschei's combat level is not shown; however, he will get progressively stronger and his attacks faster each time he is defeated. His max hits are 3 in his first form, 5 in his second, and 7 in his third. Although the fourth form is difficult, with 255 Hitpoints, it is not impossible to defeat him; if he is defeated, the player will be rewarded with a Fremennik blade.

Players can talk to Brundt the Chieftain about Koschei's history.

A ring of recoil can be an aid in killing the fourth form. When he hits, he always hits for 1 hitpoint, but at a rate of 1 hit every 0.6 seconds, and due to the rounding-up of the ring of recoil, would always hit him back for 1 at the same attack rate. Note, however, that a player would have to bring several rings of recoil, because each can only reflect 40 Hitpoints.

Low-levelled players may find his third and fourth form rather difficult, so a gnome amulet or combat bracelet is strongly advised, for it will provide a little protection (do not wear a ring of life, or you will most likely have to start over again if your Hitpoints get too low).

There are certain safespots in Koschei's basement, such as the pillars of fire, or the many chasms in the ground. Players need only run quickly over to one side of a hole, and because Koschei only moves at a walking speed, players should be at one end of a hole long before he reaches the other end. However, do not stay in a safespot for too long, or Koschei will disappear and you will have to fight him all over again. It is also strongly advised that players bring high-healing food, such as monkfish or sharks, as in his third and fourth form he hits progressively harder and quicker. Also, it appears that if you take too long fighting Koschei, he will simply disappear and you will have to start the challenge all over again. It is interesting to note that, if you manage kill him three times, decide to try and kill him a fourth time, but find yourself unable to, the trial will still be deemed as a success. Once your Hitpoints reach 1, the player will kneel down and be transported back to Thorvald, who will still give them his vote.

Note that if players die on his first, second, or third form, they will die a normal death and lose their items - players can only die to his fourth form to get the vote. Hardcore ironmen and hardcore group ironmen only need to be concerned about dying to the first 3 forms. Losing to his fourth form will not actually kill the player; a small cutscene ends the fight when you are about to lose to the fourth form.

This reward is only awarded if the player defeats all 4 forms of Koschei in battle. 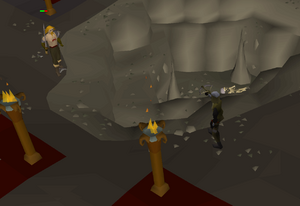