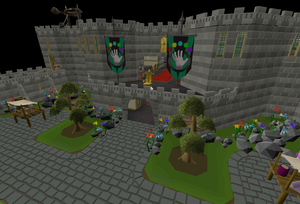 The Kourend Castle is a large castle found in the centre of Great Kourend. As Great Kourend is a currently ruled by the Kourend Council, there is no king that rules here, even though the castle appears to be furnished for royalty; this is because the last king that ruled Great Kourend, King Kharedst IV, ruled until the 139th decade (about 20 years ago).

The castle acts as a diplomatic hub, attracting ambassadors and business representatives, such as the Knight of Varlamore. With the inhabitants of the mainland beginning to travel to Great Kourend, this may extend to rulers found in major kingdoms such as Asgarnia, Misthalin and Kandarin in the future.

Throughout the castle, Kourend guards and Kourend head guards can be found. The western entrance's portcullis is closed, heavily guarded, and contains a large arsenal of ballistae, spear walls, gabion defences and barrels containing swords and bows.