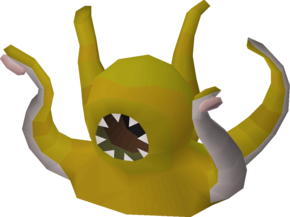 The Kraken is a stronger and larger version of the cave kraken. It requires level 87 Slayer to kill and cannot be boosted. Located at the Kraken Cove, it can only be attacked if the player has cave krakens as a Slayer task, which also requires level 50 Magic. Alongside its non-boss variants, it is the only monster that drops the trident of the seas and Kraken tentacle.

Like its smaller brethren, the Kraken is submerged underwater. Magic is the only reliable way of dealing damage to it, as Ranged attacks are heavily reduced, and Melee cannot be used. To start the fight, players can use a fishing explosive on the large whirlpool. Alternatively, the four whirlpools around can be disturbed; when all four whirlpools are disturbed, the larger one can be disturbed, which will result in the Kraken waking up. Both methods will release level 112 Enormous Tentacles, which attack with Magic.

Players can create a Kraken instance for 25,000 coins. This fee can be deducted directly from the bank; players do not need to carry coins on them to create the instance.

Drop rates estimated based on 437,585 samples from the Drop Rate Project, unless otherwise cited.