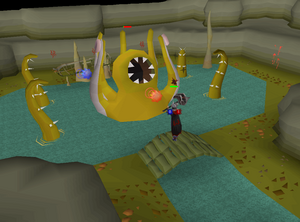 A player battles the Kraken after disturbing its slumber.

The Kraken is a Slayer boss and can therefore only be killed while on a Slayer task to kill (cave) kraken. The Kraken is located in the Kraken Cove.

It is recommended to use the Magic attack style to fight the Kraken, as it is highly resistant to Ranged and immune to Melee, due to the fact that it cannot be reached by Melee attacks. As there are no complex mechanics when facing this boss, the Kraken is a popular boss. Therefore it may be hard to find an empty world. Players can alternatively create an instance for 25,000 coins, which lasts until the player leaves or logs out.

The Kraken is located in a separated section of the Kraken Cove. The quickest way to get to this dungeon is via fairy rings:

Run north after entering the Kraken cove to find the entrance to the Kraken's lair. 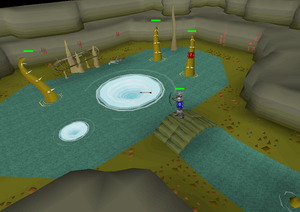 Without a fishing explosive, players must disturb the four smaller whirlpools before they can successfully release the Kraken.

When using explosives, the impact audio cue indicates the Kraken is active, and attacks will register even if it has not emerged visually; any attacks made before the cue will produce no response.

During the fight, the player will be attacked by four Enormous Tentacles and by the Kraken itself:

The Kraken is a popular boss, therefore it may be hard to find an empty world. To combat this, players can create a private instance for 25,000 coins.

An advantage of a private instance is that dropped items stay on the ground for a longer period of time. Normally, items disappear after two minutes upon being dropped and other players can see it after one minute. However, this is not an issue if instancing, as dropped items disappear in 30 minutes within the Kraken Cove instance. As the Kraken regularly drops a generous amount of food in the form of 5 edible seaweed or 5 sharks, the instance makes it a lot easier on the player to juggle these food sources before they disappear.

When exiting the instance, either by leaving, dying, or logging out, all items on the ground will be permanently lost. If a player dies, all items carried will be moved to a gravestone outside the instance.

As the Kraken and its tentacles use typeless attacks, the protection prayers have no effect. Players that bring an imbued heart should pray Preserve. Players with low Magic and/or Defence may consider praying Augury or Mystic Might to increase their magical defence.

This is the best-in-slot available equipment for maging the Kraken. The set up shown in this section currently costs approximately 1,190,927,708 coins. See the table below for an overview of equipment alternatives in case this setup is not accessible or too expensive.