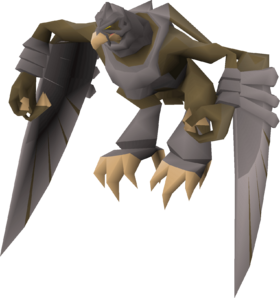 Kree'arra is one of Armadyl's most trusted generals. He is the most powerful of the surviving aviantese, and leader to the forces of Armadyl's Eyrie in the God Wars Dungeon.

In order to reach the encampment, players must first wield any crossbow along with a mithril grapple. A Ranged level of at least 70 is then required to navigate the chasm. To enter the boss room, players must have slain 40 followers of Armadyl, with aviantese and their spiritual variants being his only followers within the dungeon.

Kree'arra can be seen yelling several battle cries in his chamber. However, unlike the other generals, his taunts are non-verbal.

Like other God Wars Dungeon bosses, Kree'arra roams around a rectangular room with his bodyguards until a player enters, attacking them on sight. He attacks primarily with Ranged, and his bodyguards use a different combat style each. However, if no one is targeting Kree'arra, he will fly up to players to use Melee attacks as well. If all players leave, his health and stats will be reset.

Like other Armadylean followers, he and his bodyguards cannot be attacked with Melee. 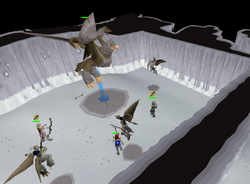 Drop rates estimated based on 29,637 kills from the Drop Rate Project, unless otherwise cited.