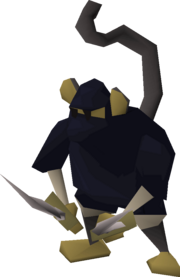 Kruk is a monkey that is the head of the Ninja Monkey Guards of Marim, and is located on the east side of the gate, up on the hill. He is the monkey that shouts for the gates to be opened when you approach in monkey form. He is involved in the Monkey Madness I quest, and players must talk to him before meeting King Awowogei to make an alliance with him. Although he has a combat level, he cannot be attacked until a certain stage in Monkey Madness II, nor does he directly attack the player (he simply knocks the player out instead). He is replaced by Duke during the events in Monkey Madness II.

He also looks bigger than the other monkey ninjas. If you are caught wandering in Marim as a human, he will knock you out with the aid of his two guards and place you in the jail where you must escape. To reach Kruk, you can go to the cliff opposite of where Kruk is—there should be an opening allowing you to walk up the hill. Next, climb the ladder at the top of the cliff, cross the bridge, and go down the other ladder.

He is also involved in the Monkey Madness II quest, in which the player navigates through a large dungeon to kill him in order to retrieve a paw from his corpse, which is used to make a Kruk monkey greegree in order to impersonate Kruk when talking to Awowogei.

When being fought, Kruk will use all three combat styles: melee, ranged and magic. Kruk's melee attack is very powerful, capable of hitting up to 30s.

Can be safespotted and killed without taking damage by flinching with melee. Lure Kruk to north then run to the south-west wall.

Warning: The fight with him is instanced, so if you die while fighting him, any items not kept on death will be permanently lost. Avoid bringing items that you cannot afford to lose.