Krystilia is a Slayer master found in Edgeville's jail north-east of the bank. When spoken to, she expresses her love for magic and the Wilderness, and claims the guards locked her in the cell for trouble-making.

Players can speak to her to change their respawn point to Edgeville, after unlocking the feature for a one-time fee of 5,000,000 coins.

In addition to this, killing monsters on her tasks can yield Larran's key, which can be used to open Larran's small or big chest, also found in the Wilderness. They act similarly to Konar quo Maten's brimstone keys and brimstone chest.

Tasks from Krystilia have a separate task completion counter to standard tasks. Players will have to complete a five Slayer task streak from her to begin earning Slayer reward points from Wilderness slayer tasks. Although they are counted separately, players cannot have a regular and Wilderness slayer task at the same time. If players do not want to do one of her tasks, they can speak to Turael in Burthorpe to have him give them another task; however, doing so will reset the player's Wilderness task streak (but not their normal Slayer task streak).

For a kill to count towards a Krystilia task, the player must be physically located inside the Wilderness when the monster's death occurs. A player who is using a dwarf multicannon will receive the standard "As your slayer task is from Krystilia, you can only perform it inside the Wilderness" message if they teleport out of the Wilderness to restock and remain outside of it when their cannon kills the monster. The safe zone buffer immediately outside the Ferox Enclave counts as the Wilderness for task purposes, but the Enclave itself does not. Thus a player using the pool of refreshment to resupply will not receive credit for the kill if they are inside the Enclave.

Completion of a task assigned by Krystilia after the 5th task streak will grant: 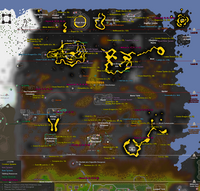 A detailed map of the Wilderness.

Out of all possible tasks, only bloodvelds, jellies, dust devils, nechryael, abyssal demons, and spiritual creatures require a Slayer level. In addition, the locations will only list those found within the Wilderness.

Monsters assigned by Krystilia have a chance to drop Larran's keys and Slayer's enchantments, the latter of which can be used to upgrade the Slayer's staff to a Slayer's staff (e).