Although other Slayer master tasks may be completed in both Wilderness and mainland locations, all of Krystilia's tasks must be done in the Wilderness. That means players should only take gear they are willing to lose.

Warning: Assess and mitigate risks, and do not ever take any items you cannot afford to lose!

Map of the Wilderness[edit | edit source] 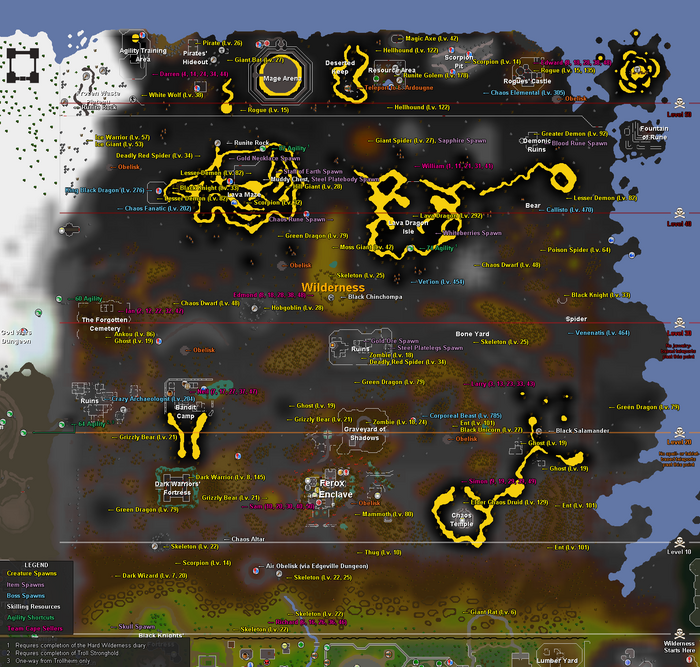 Krystilia has no requirements, but players should be sufficient enough to survive in the Wilderness. They should also possess decent stats since she can assign monsters ranging from Combat level 8 to 470, especially in terms of Wilderness bosses.

High Agility is an advantage in the Wilderness. The energy restoration rate is useful, since you often need to travel longer distances on foot in the Wilderness. Furthermore, run energy may be important when fleeing player killers. Additionally, access to the following shortcuts may make both travel and fleeing easier:

Note: Also, Accept Aid should be set to off. There is no reason to have it on otherwise.

This setup is aimed for players who wish to boost Slayer points through Wilderness Slayer. Craw's bow is the best weapon to use for most tasks, but for some tasks toxic blowpipe is better due to its higher attack speed. Players should bring 4 expensive items and the rest of the equipment should be cheap that the player will not mind losing.

Note: A lockpick is needed to open the Axe Hut to slay magic axes.

For the inventory, you want to bring food, a looting bag, and some runes for spell-casting and/or teleporting if using. Also, a one-click teleport is recommended especially if in sub-level 29 Wilderness.

If in Deep Wilderness, you will have to either run down to lower-level Wilderness or to a teleport point, such as an obelisk or the Wilderness lever. Dragonstone teleportation jewellery (namely Amulet of glory, Combat bracelet, Ring of wealth or Skills necklace) or the royal seed pod can teleport you out, up to level 30 Wilderness.

A Dinh's bulwark provides huge defensive bonuses and can be used to escape player killers if you can afford one. Also, although optional, bringing and switching to a fun weapon for attacking any monster in single-way combat to try escaping via the X-logging method can increase chances of survival, especially in deeper Wilderness levels.

Potions are completely optional, but if using Prayer, then several prayer potions are mandatory. If taking potions, it is recommended to take a (Super) combat potion (or Ranging potion if using Ranged) to spare inventory space.

As for food, it is recommended to fill the rest of your inventory with at least lobsters, preferably monkfish, or better.