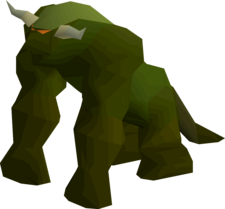 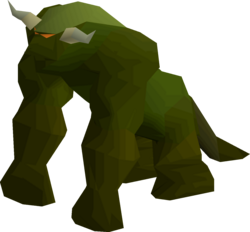 Kurask are slayer monsters that require a Slayer level of 70 to damage, as well as usage of leaf-bladed weapons, broad bolts, broad arrows, amethyst broad bolts, or Magic Dart. Kurask are immune to poison and venom. Kurask are also immune to damage from a dwarf multicannon and thralls.

Their attacks are relatively inaccurate due to their low attack level, but can hit somewhat high if they do.

Although kurask are invulnerable to any damage from the eldritch nightmare staff, Saradomin godsword and toxic blowpipe special attacks, they will still heal the player as if it would have dealt damage, making them useful as special attack weapons during extended trips. The ancient mace special attack also restores Prayer points equal to what damage would have been dealt. Guthan's does not work.

These monsters, along with Turoth, drop the leaf-bladed sword. They are also known for their light mystic robe top and kurask head drops, as well as being the only monster to drop the exclusive leaf-bladed battleaxe. 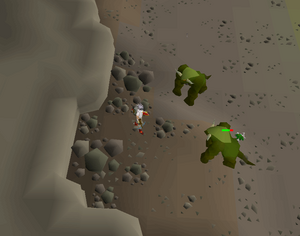 A safespot available on the east side of the task-only area. 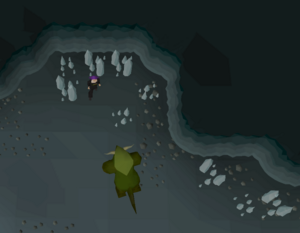 Drop rates estimated based on 480,493 kills from the Drop Rate Project, unless otherwise cited.

The average Kurask kill, including unique drops, is worth 4,598.

For Kurask in the Iorwerth Dungeon, the average kill is worth 5,330 due to the additional chance of receiving a crystal shard as a tertiary drop. This value for crystal shards assumes that they are made into divine super combat potions.

There is a 18/124 chance of rolling the herb drop table. Kurasks will always drop three herbs at a time.

There is a 15/124 chance of rolling the rare seed drop table, with the exception of limpwurt seeds.

There is a 6/124 chance of rolling the gem drop table.