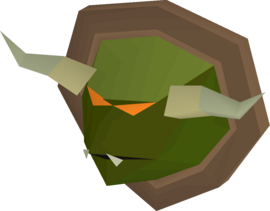 A mounted kurask head can be built in the Head trophy space of the Skill Hall in a player-owned house. It requires 58 Construction to build and when built, it gives 357 Construction and 657 Slayer experience. The player must have a hammer and a saw in their inventory to build it.

Players must complete Priest in Peril to be able to stuff the kurask head. If players remove the mounted head, they will receive nothing back.

In your POH[edit | edit source]