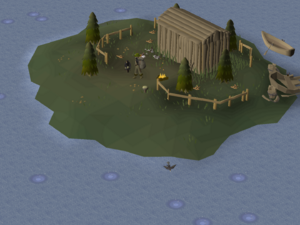 Lake Molch is a large lake found just west of Great Kourend. Here, players can speak to Alry the Angler to engage in aerial fishing, a combined Fishing and Hunter activity. It requires a minimum level of 43 Fishing and 35 Hunter. Players can hunt for various fish and salamanders with a cormorant, much like falconry where players hunt kebbits with a gyr falcon.

To reach the island in the centre of Lake Molch, the player must take a boat at one of the three docks located on the northern, western, and eastern shores of the lake.

The following Hunter creatures are found in this area, which can be caught using the aerial fishing technique:

The following items may also be rarely obtained: