From Old School RuneScape Wiki
Jump to navigation Jump to search
The RuneScape Wiki also has an article on: rsw:Lamp
This article is about the random event reward. For other xp lamps, see Experience lamp.

The lamp is a reward from the Genie random event and cannot be traded or banked. Rubbing the lamp gives the option of adding experience to a skill of your choice. The amount given is your current level in the skill multiplied by ten (e.g. level 20 Attack increases by 200 experience). This is not considered a large reward by most players, unless it is being used to level up skills that are time consuming or expensive to level up, such as Agility and Construction.

It can also be received as a rare reward from the Guardians of the Rift minigame when opening the Intricate pouch. 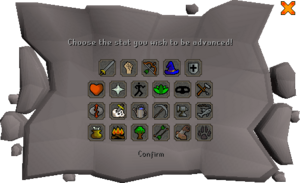 The interface when using the lamp.

Genie lamps are most commonly used by players to advance skills that are either low or considered hard to level. Combat skills are seen as a poor use of the lamp, unless one is a combat pure, as lamps allow pures to gain combat experience without training Hitpoints. Skillers sometimes use lamps to train Slayer without raising their combat. A player may hold onto the lamp until they gain a level, especially if they are close to one. This is because it will give slightly more experience (10 more per increase) at a higher level. However, retaining the lamp will take up inventory space, as it cannot be banked, and this can be counterproductive when training some skills. Although it can take some time, it is possible to gain multiple Genie events lamps.

Another common reason for a player keeping a lamp would be for the ease of reaching celebrated levels like a 99. This makes the level-up significantly easier and allows the player to have a much wider choice of level-up locations. An example might be a player achieving 99 Slayer in their player-owned house by using the lamp to obtain the final experience required to level, though admittedly some skills (including Slayer) have other methods for gaining xp anywhere that are easier to access and bankable.